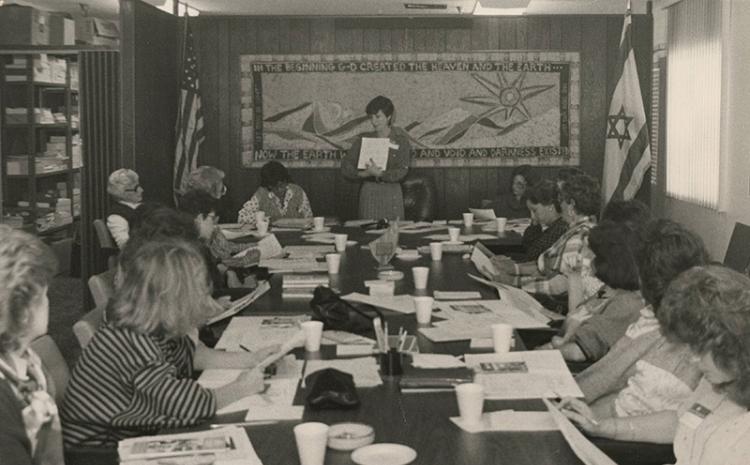 Women’s organizations have historically been a base from which women have entered the public sphere. As feminist theorists have argued, the “public sphere” has been both historically and academically defined as a space devoid of female actors. Participation in women’s associations, Temple Sisterhoods, and philanthropic organizations offered Jewish women an opportunity to engage in that public sphere. Las Vegas Jewish history cannot be understood without looking at the contribution of Jewish women both as individuals and within Jewish organizations. Through the Southern Nevada Jewish Heritage Project, UNLV Special Collections provides access (in person and online) to historical materials related to a variety of Jewish women’s activities, including oral histories of key Jewish women and the records of the Las Vegas/Southern Nevada chapter of Hadassah and the Sisterhood of Temple Beth Sholom.

In the post-war era, Hadassah: The Women’s Zionist Organization of America actively engaged women in both the political process and in the Jewish community-building arena. As outsiders, women often recognized communal issues and problems that the male-dominated world neglected to recognize. Hadassah members often viewed the mission of Zionism and American public policy from a different perspective than Jewish-American men might have. Hadassah focused on politics, but also organized practical responses to social welfare issues in America and Israel. The Las Vegas chapter addressed all of these issues and also raised funds for local medical organizations.
Like their Christian contemporaries, Jewish women started organizing during the early twentieth century. In 1893 the National Council of Jewish Women was formed. It was followed by Hadassah in 1912, synagogue sisterhoods in 1913, Pioneer Women, and Women’s American ORT, to name a few. By the 1960s, Jewish women’s organizations boasted nearly one million members, or almost 20 percent of the American Jewish population. Over 30 percent of those members belonged to Hadassah. Jewish women’s organizations in the United States shaped women’s lives and their identities as Jews, women, and Americans. Groups like Hadassah influenced over 300,000 Jewish women and their families. In Las Vegas, the local Hadassah chapter fundraised for both Zionist and local causes, held workshops on contemporary domestic political issues, and reached out to a younger generation of women to educate them about the importance of Israel and Zionist activism.

Jewish women’s organizations served as a springboard into the political arena and activist organizations. Dorothy Eisenberg, a former president of the Jewish Federation of Las Vegas, and Flora Dungan were both leaders in the Jewish community in Las Vegas as well as the part of the original Las Vegas Valley chapter of the League of Women Voters. Eileen Brookman, a Nevada Assemblywoman, was very involved with B’nai B’rith Women, the Anti-Defamation League, and the NAACP.

Many other Southern Nevadan Jewish women have also made their mark in the public sphere on local, state, and national levels. The following is only a sampling of local Jewish women who have donated their records to UNLV Special Collections: Miriam "Mimi" Katz was an active volunteer for the Brandeis National Committee Las Vegas chapter, the Temple Beth Sholom Women's League, and multiple political events and campaigns. Ray Fiol, Esther Finder, and Anita Schuster are leaders in the local Holocaust survivors community and Edythe Katz-Yarchever was a pioneer in Holocaust education. Shelley Berkley served in the U.S. Congress and Renee Diamond was a member of the Nevada State Assembly. Muriel Stevens is a former newspaper columnist, author, chef, and radio and television host. Please explore the Southern Nevada Jewish Heritage Project to learn more about Jewish women in action.